The pain of empathy

Tonight I had a reminder of why I stopped looking at facebook.   As I mentioned in my previous post my only weakness - I say 'weakness', it's only been twice in the last fortnight! - is to look at Lazlo's breeder's page to see her dogs.   So I had a look tonight and one of her posts included comments about one of her dogs having lost her on the beach for 30 minutes, which any dog owner will tell you feels like 30 hours.   Now my empathy response has kicked in and I recognise the feeling as one I have not been having for the last two weeks.

For me, empathy with negative experiences usually manifests itself as anxiety, faster heart rate, even a feeling of panic as my brain imagines or remembers being in a similar situation.

My empathy can relate to anything - I get it when one of my friends has to have their dog put down; if a friend loses a parent; if I imagine how Mr H must have been feeling at our RTA, or if I see an ambulance - that relates both to our RTA and to watching my father taken away in one (he survived); I get it when someone has a disappointing experience, one that I could easily have had.  It has differing levels of symptoms depending on the context but it nearly always feels unpleasant.  (You probably noticed that I mentioned the loss of  a dog before the loss of a parent, because it happens more often; and I've experienced the former three times, and the latter only once).

I now realise how many things on social media are liable to trigger this empathetic anxiety, and it has made me even more determined to do my mental state a favour and stay off it. 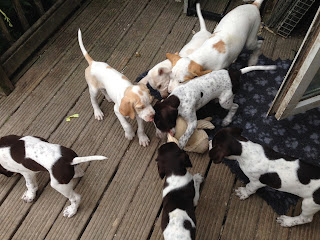 Lazlo and his brothers and sisters.

If you prefer to just read, appreciate and then move on, that's fine too :-)

Writings that I enjoy